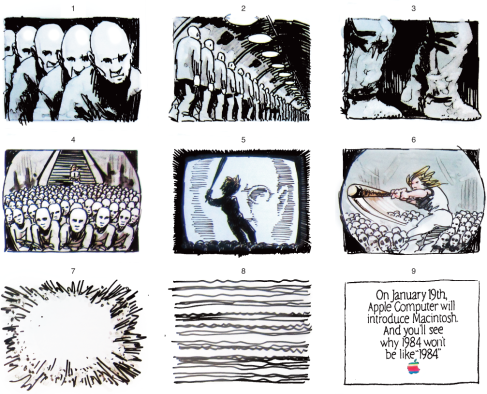 Stuart Elliott labeled this the “Best TV Commercial Ever Made.”

THE YEAR IS 1983 AND APPLE IS ABOUT TO LAUNCH a new computer called Macintosh. Steve Jobs thinks it will change the world. He wants to do a big introduction. Someone says, “Let’s throw a simultaneous launch party in NY, Chicago & LA with the most famous rock bands on the planet.” After Apple’s CFO runs the numbers, the upstart computer company realizes they can either throw the parties or make the computer. Jobs tells his agency, “Do us a TV commercial or something.”

“Why 1984 Won’t Be Like 1984” was conceived as a print headline the year before by Gary Gussick & Mike Moser. The long copy newspaper ad never ran. My art director partner, Brent Thomas, and I purloined it for our purposes. It was the inspiration for the whole spot. Our own “Suits” tried to keep us from shooting a :60 version because the client had only signed an estimate for a :30. Without authorization, I authorized it. After the spot was finished…

Jobs previewed the ad for the Apple sales force. They were thrilled. But when Jobs previewed the ad for the Board of Directors, everyone in the boardroom was mute. Philip Schlein, the CEO of Macy’s California, had his head on the table. Mike Markkula stared silently; at first it seemed he was overwhelmed by the power of the ad. Then he spoke: “Who wants to move to find a new agency?” Sculley recalled, “Most of them thought it was the worst commercial they had ever seen.” Caught between a rock (Jobs) and a hard place (the Board), Sculley got cold feet and told CMO Bill Campbell to “figure it out.” Campbell, a former football coach, decided to throw a “Hail, Mary.” He told his team, “I think we ought to go for it.”

The only reason “1984” aired was because we were unable to sell off half a million dollars worth of Super Bowl time and had to fill 60 seconds with something. So we really owe it all to the ineptness of Chiat/Day’s media department.

In 1999, he founded “and WOJDYLA,” the first ad agency to put clients first. Building on its success, Mr. Wojdyla co-founded “AND vertisinginc®,” a unique agency best described as “the polar opposite of advertising.”
View all posts by David Wojdyla →
This entry was posted in Uncategorized and tagged Apple, Lee Clow, Steve Hayden. Bookmark the permalink.